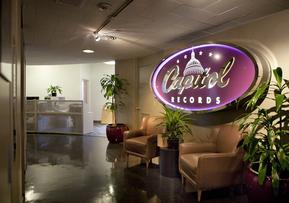 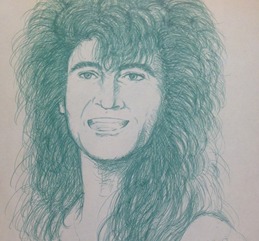 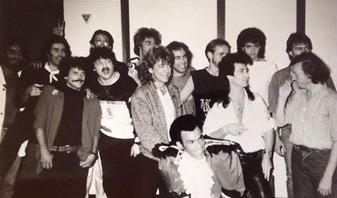 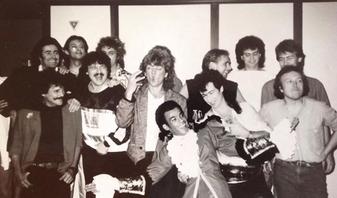 While recording the GMT album in Frankfurt, a German Producer named Frank Farian heard my voice and approached me. He was putting together a "super group" by the name of "Far-Corporation". Members included Bobby Kimball (Toto), Leif Johannson (A-Ha), Steve Cassini (Singer/Composer), Simon Phillips (Toto), and Scott Gorham (Thin Lizzy). Although many thought it was sacrilegious, Frank decided to produce and record a remake of  Led Zeppelin's "Stairway to Heaven". The first record “Division One” was an instant top 40 chart success. The "Stairway to Heaven" remake reached #8 in England and sold over 2 million singles. With many TV

appearances Far-Corporation was in everyone’s

living room. The debut of the single was on the

had a viewing audience of 80 million. It so

happened that Robert Plant was also on the

show. You can imagine the awkwardness of

him seeing the black and silver backdrop with

the very large words “STAIRWAY TO HEAVEN” on it.  He stared me down until I directed him to the Producer. He really liked our version and we ended up laughed and drinking quite a lot that evening. Far Corporation made a second CD and among many others, performed live in Ibiza during the Barcelona Olympics with millions of viewers watching.

Now bear with me while I'm jumping around a bit: While in Scotland @ Highland Studios, recording the Samurai record, MSG bass player Chris Glenn showed up at the studio with the then new MSG drummer Ted McKenna (ex Alex Harvey band), who replaced Cozy Powell after his terrible and fatal car crash. After that, Michael Schenker came to a Grand Prix show in London with his whole band and the next day I was offered to join them in the studio. I declined! Graham Bonnett was the singer with MSG at that time.

Fast forwarding again, while "Stairway to Heaven" was receiving heavy rotation at radio, Rudolf Schenker (Scorpions) was curious who was singing. Michael heard it as well and realized it was me. I was on a Far Corporation promo tour in England, when I received a call from the Scorpions Management company"Rocksound".

Now, four years after I declined Michael's initial offer, I agreed to fly to Hannover, Germany and to

audition for MSG. I was the last of 17 singers! We demoed at Rudolf’s studio until 3am that Friday

night. As I was leaving for my hotel, Michael gave me a cassette with a song idea and asked if I could

work on it and have it ready by 12noon  the same day. I was kinda pissed. I had little to no sleep and

sang all day. I wasn't going to be bossed around anyway, so I went to bed. After a few hours of rest-

less sleep, i got up and gave it a listen (the track ended up being  “No Time For losers” and became

one of the songs of the McAuley/Schenker debut album "Perfect Timing").

A week later, a meeting was set in London and I met Michael's manager David Krebs, who also managed Aerosmith. I accepted the offer to join MSG and Michael explained he wanted more than a singer, he wanted a partner. Someone to share the day to day operations and responsibility of the new venture. I mentioned that I loved the "MSG" and because my last name started with an "M", we kept the logo, but changed the name from "Michael Schenker Group", to "McAuley Schenker Group".

We locked ourselves away in a studio in Hannover for endless hours each day and set a task to write one song per day. We recorded each song on a 4 track Tascam, and when Rudolf heard the songs, he thought it was time to put a band line up together.

"Lionheart" Steve Mann on guitar/keyboard. Although most of the auditioning was conducted in

London, we ended up with Bodo Schopf from Stuttgart, Germany on drums. Go figure!!! I moved to

Hannover, Germany and began recording at Rudolf’s studio. We demoed 6 songs and on their strength

got signed to EMI Germany with distribution through Capital records in the U.S.

Now it was just a matter of time until we went international! Can you hear me calling U.S.A.?! 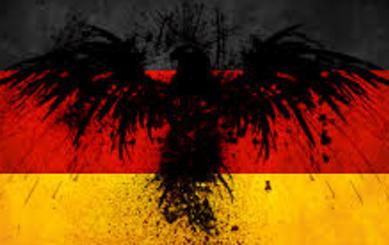